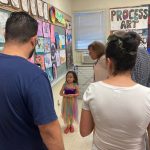 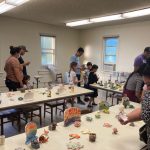 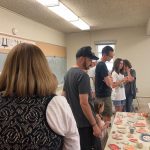 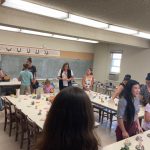 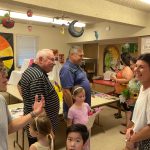 Literally hundreds of children, adults and eager supporters came to see the artwork on display, listen to music and learn more about the FCCG-Art Academy. Many thanks to the teachers and volunteers that helped to make the night a huge success. Watch the FCCG website for the next session of classes.

It is for freedom that Christ has set us free. Stand firm, then, and do not let yourselves be burdened again by a yoke of slavery. Galatians 5:1
The Fourth of July—also known as Independence Day or July 4th—has been a federal holiday in the United States since 1941, but the tradition of Independence Day celebrations goes back to the 18th century and the American Revolution. On July 2nd, 1776, the Continental Congress voted in favor of independence, and two days later delegates from the 13 colonies adopted the Declaration of Independence, a historic document drafted by Thomas Jefferson. From 1776 to the present day, July 4th has been celebrated as the birth of American independence, with festivities ranging from fireworks, parades and concerts to more casual family gatherings and barbecues.
On July 4 we celebrate our independence as a nation. We make a point to remember and let others know that we celebrate our freedom. The passage from Galatians reminds us of our freedom in Christ. No longer slaves to the law, but free in the Spirit.
The apostle Paul reminds us that we are no longer slaves but children of God because of Jesus Christ. A child is a word that describes the relationship. We are in a free relationship with Christ. We are heirs to the inheritance of God’s kingdom. We are on the receiving end, not the taking end. This is the good news of the gospel. Eugene Peterson writes: “Receive is a freedom word. Take is not. To receive is to accept what the divine provides for us. To take is to plunder whatever is not nailed down. To receive is to do what children do in the family. To take is to do what pirates do on the high seas … The difference between receiving and taking is deeply interior. It has to do with disposition of spirit, an act of faith, an openness to God. Outwardly similar, even identical, physical actions constitute both taking and receiving … But the similarities are all on the surface; by observing context and continuities we can easily distinguish taking, with all its ambitious assertion and prideful aggrandizement, from receiving, with all its grateful acceptance and humble receptivity.”
Let us celebrate this month our independence as a nation, but more importantly, may we receive the freedom and grace given to us by God. May we use our freedom wisely to promote the well-being of all God’s children, and to be good stewards of God’s creation.
Happy Independence,
Karen